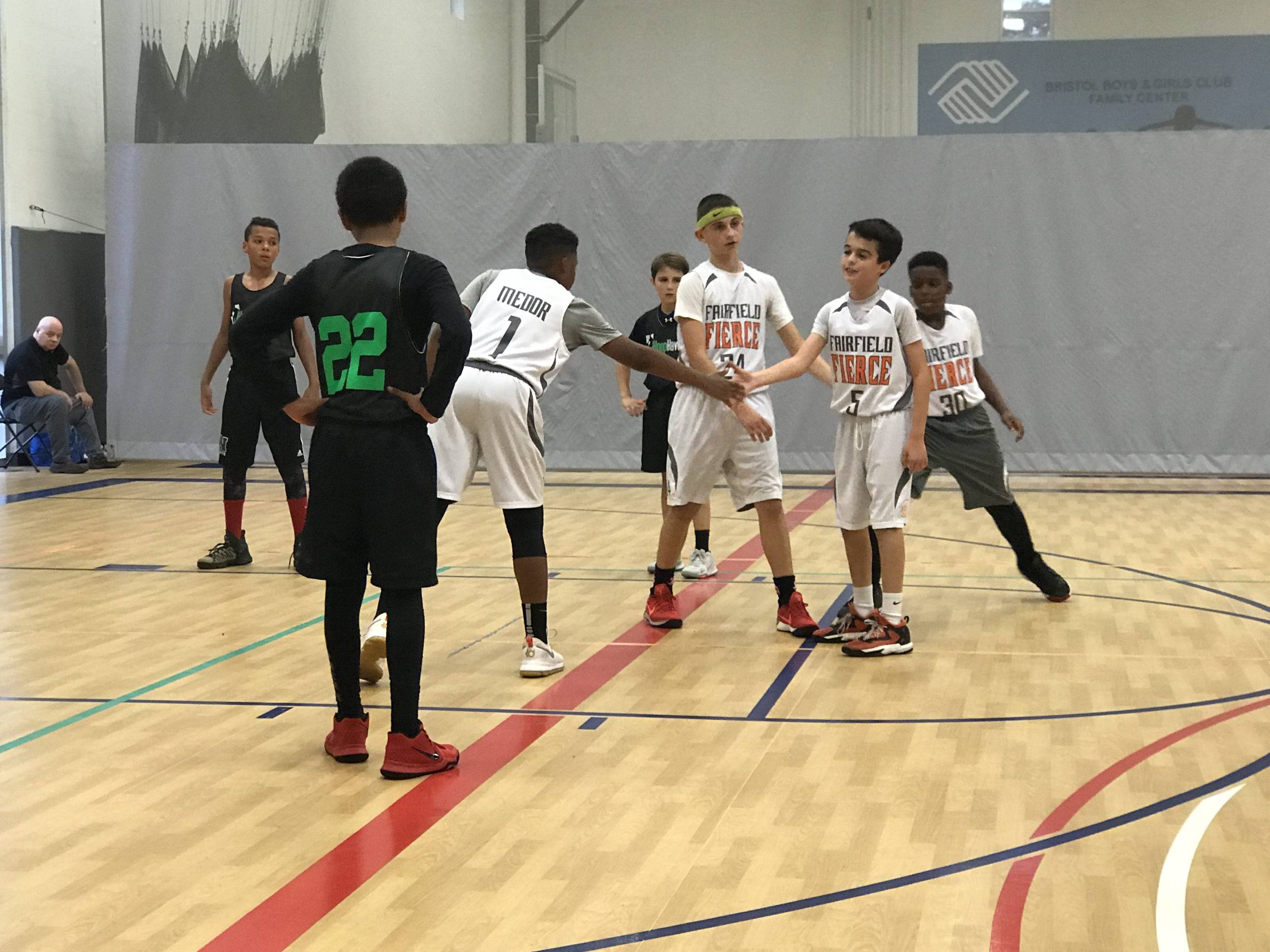 Today in Bristol, CT all 5 Fierce teams were in action.

13-Under Lipow got the day started right with a hard fought 42-34 win over Avon. Dillon Mannix and Liam Ryan caught fire from long-range. TJ Martere had approximately 10 rebounds and 5 rejections. Jack Petrafesa lit it up with 18 points in the 2nd half to close out the game. The squad kept it going vs West Hartford thanks to more hot shooting from Liam Ryan and inside work from TJ Martere. But it was Aston Martin who flaunted his mid-range game, aggressive to the hoop with nifty passing to the cutters through the lane.

13-Under Bindner then rallied to also defeat West Hartford 43-35. Andre Mead continued his torrid play on both sides of the ball. Andre was defending, shooting, hitting the open man on the break, and mixing in some jaw-dropping moves to the basket. Jack Bloomingdale was making his presence known in the paint area. Miles Bradley, Gerard Roarty and Samuel Frank were knocking down their shots. The boys fell short in their 2nd game to Norwalk but not without a fight. Jake Fitzpatrick delivered a very impressive performance scoring 8 points and grabbing at least 8 rebounds, all while taking on the task of guarding the opposing center that was twice his size.

12-Under Seawright had their best day of the fall season. In a 36-29 victory over Norwalk, Kyle DeFonce was everywhere on the floor and playing with great assertiveness. Theodore Mante was a beast down low for the Fierce, finishing every possession strong to the rim. The team carried the momentum into the second game and were clicking on all cylinders. Jack Balsano was flying around the passing lanes and for the offensive rebounds. Jordan Katz and Ryan Mollica were a dynamic guard duo, working together all game with swarming defense and pace-pushing transition offense. Ryan scored an estimated 16 points and Jordan got his own while setting up teammates all day long. Jake and Jamar Medor was hustling everywhere and knocking down shots, and on one fast break Jake hit older brother Jamar right in stride for the score.

11-Under Seawright kept fighting in their 2 games with Finbar Malloy having himself a nice scoring day. Nate Moore and Michael Bernier were all over the glass as usual, and Ryan Moore was running through defenses as usual. Will Kane contributed some outside shooting.

10-Under Bindner also had a resilient day with good shooting from Matt Garcia, Danny Goldberger and Devin Kass, and defensive energy from Charlie Scott. Grady Kaliski had the highlight play with a fast break And-1 in the second game.

Great day for the Fierce boys!