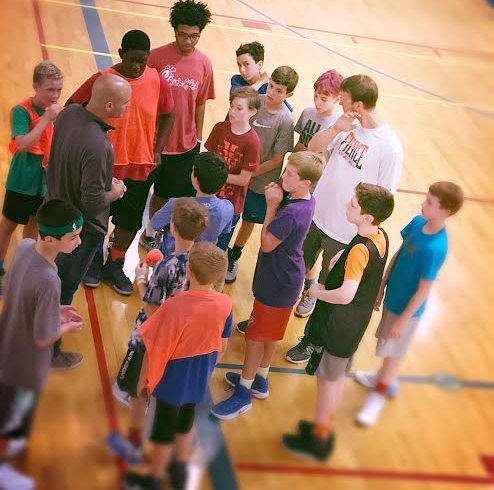 Tonight the fifth and final week of the Fierce Pick-up Games finished off in exciting fashion.

In the 5/6th grade session, Team Matt pulled away to a double digit victory and were led by the guard play of Ryan Mollica, Ben Davenport and Ryan Moore. Mollica was flying all over the court impacting the game on every possession. Davenport was showcasing his offensive repertoire, both shooting and on the attack. Moore was fighting for and winning every loose ball that was out there. On the inside, Liam Yin was cleaning up all of the offensive rebounds for easy put backs. Team Judah was led by the gritty tough play of Emmett Derby, Brendan Devine and Roan Smith. George Todorovich carried much of the scoring load, and Theo Mante dominated the paint.

In the 7th grade session, it took overtime for Team Matt to pull out the most thrilling game of the season. Griffin Harding led the way with an estimated 30 points, scoring all over the court. Stephen Keating once again took ownership of the inside, and also made the biggest play of the game with 5 seconds remaining in regulation – cutting off the passing lane for a steal and quick layup to tie the score. Sean Donohue caught fire from outside, and Jack Balsano contributed key baskets as well. Team Judah was propelled by a jaw-dropping 45 points from Jack Petrafesa. Simply unstoppable down the stretch. This was facilitated by the great court vision of Liam Ryan, who was quietly an assist machine. Harrison Keith also showed off his play-making, with some impressive length of the court baseball passes. And Jack Knott again had a big time block party with at least 5 intimidating rejections.

Thank you everyone for a fantastic inaugural Fierce Summmer Pick-up games!