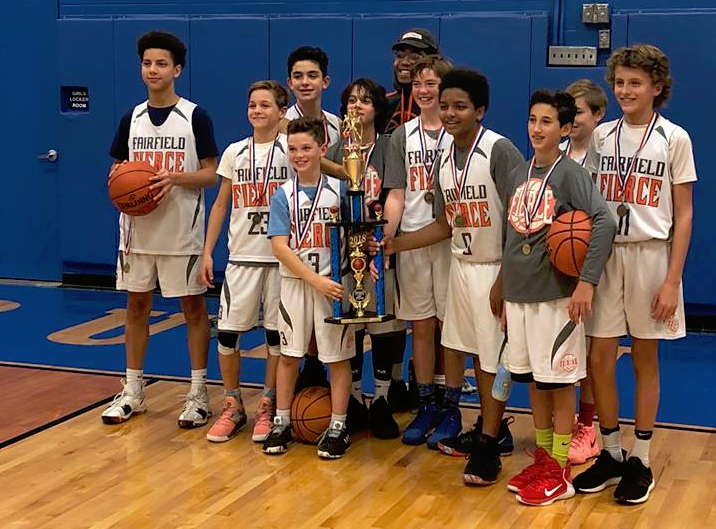 7th grade won the championship! 7th grade was focused from the opening tip as they jumped out to a 24 – 0 lead in their first game against CT Dynasty of Danbury. They then defeated St. Theresa’s. In their second weekend, 7th grade came up just short in overtime to Trumbull Travel Basketball. However the basketball gods scheduled these two even teams against each other once again in the Sunday semi-finals. In that game, it was the Fierce that pulled it out on a buzzer beating steal and layup by Luca Fusco. They kept it going in the Championship Game with a 45 – 38 win over a tough West Hartford squad. Devin Julious scored 21 points including three 3 pointers. Tate Mahoney also had it going from long range. Congrats Boys!

6th grade had themselves a great tournament as well. They won 2 of their 3 games to advance to Championship Sunday, with a 35-26 victory over St. Mark of Stratford and a nail-biting 24-23 victory over the Orange Wolverines. In their semi-final game, 6th grade found themselves in a 14 point hole against Seymour, and stormed all the way back to take the lead. However four Fierce players fouled out of the game in the fourth quarter of action and the tournament run came to an end.

5th grade performed well in their opening game with a 35-33 win over Guilford. They were then eliminated from the tournament with two consecutive losses including one to the eventual champion. They played hard all tournament and continued to show improvement.

Fantastic start to the season for all of our travel teams.