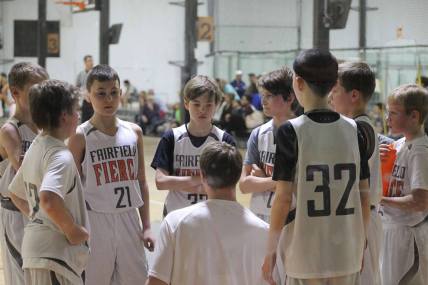 Fierce Pride at the Junior Tip Off

On Day 1 of the Jr. Tip Off tournament, the Fierce program came to play.

13-Under Lipow pulled away from CT Elite Basketball in a 58-36 win. Stephen Keating was pushed beyond his limits in a dominating performance down low. Charlie Began was in attack mode from the start, and Luke Brodsky was making smart plays off the bench. In their later 49-45 upset victory over the Wallingford Warriors, Jack Petrafesa refused to lose and stepped up with big plays all across the 2nd half of action. Charlie Began put the team on his back with 20 points, to go along with high energy defense and rebounding. Dillon Mannix was clutch down the stretch with his outside shooting, hustle to the loose balls, and protecting possessions as the Warriors were desperate to force a turnover. Jack Knott never left the game because of strong rebounding. Sean Racette made important contributions off the bench on both sides of the ball, and Thomas Schindler drilled perhaps the biggest 3-pointer of the game with under 4 minutes remaining.

In their two games, 13-Under Seawright was led by Liam Ryan’s shooting and scrappy defense. Jack Balsano also brought the defense and rebounding. Eamon Jones, Sean Donohue and Theo Vergakis carried much of the scoring load. They look to bounce back tomorrow morning vs CT Elite Basketball.

11-Under Bindner couldn’t have asked for a better debut together. Their full-court press was too much for Connecticut Elite Basketball to handle on way to a 48-8 win. Then they played to the end against the always elite New York Rens. The Fierce had the game within 6 points at 4 minutes remaining but the Rens had too much size. Gavin McCarthy and Luca Antonio led the Fierce in scoring, with contributions from Wyatt Dodge. Ben Davenport helped control the game tempo and set up the offense with strong ball-handling for the Fierce.