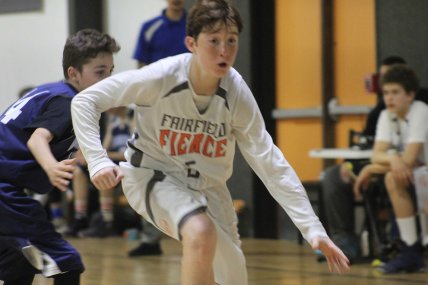 Fierce Leaving it All on the Courts

Today at the 2017 Roundball Classic, the Fierce program left it all out there.

13-Under Seawright won 2 of 3 to qualify for Sunday’s Championship Game. The squad was led by the scoring of Matt Vivona, Sean Donohue, Eamon Jones and Liam Ryan… the rebounding of Tobey Sappern and Aston Martin… and the defense of Jack Balsano, Jack Murphy and Jake Fitzpatrick.

13-Under Lipow had its own pair of imposing victories over two teams from Rhode Island. In a 48 – 34 win in the first game – Charlie Began, Griffin Harding and Max Andrews went to work on both ends of the floor. In the second game, Jack Petrafesa opened up action “unconscious” with 4 consecutive three-pointers, and the Fierce never looked back. Thomas Schindler, Dillon Mannix and Sean Racette caught the shooting bug and sprayed in shots from around the perimeter. Jack Knott and Stephen Keating brought the interior defense in what turned out to be a 30 point victory.

11-Under Bindner put together two furious comebacks in their games today, but fell short. Gavin McCarthy and Ben Davenport handled the ball and made clutch plays. Jonathan Morris was ripping down the boards. Wyatt Dodge, Emmett Derby and Griffin Rothe all contributed key plays.