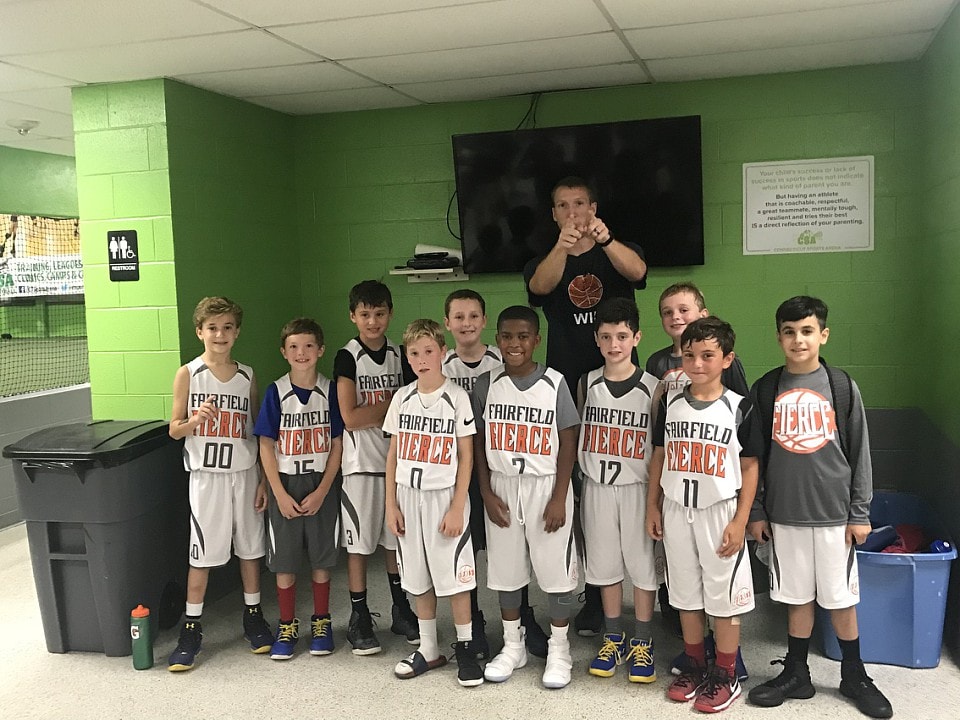 This weekend the Fairfield Fierce opened up the fall season at the Tri-State Tip-Off in Brewster, NY and New Milford, CT

10-Under Bindner came out of the gates blazing, going 3-0 and capturing the tournament championship over Fenom Fire (Westchester). They rode ferocious team defense and unselfish ball movement all the way. Ryan Luchetta was in charge in every aspect — defense, rebounds and outside shooting. Grady Kaliski was a force in the block, Charlie Scott and Danny Goldberger were diving everywhere for loose balls, Devin Kass put on a dribbling display, Aleko Verkakis and Matt Garcia had the shooting stroke, and William Jacobs and Barrett Mullahy brought their toughness.

11-Under Seawright stuck together all weekend with unselfish teamwork of their own. They opened up with a gritty 30-23 win over CT-PHD and fought hard to the end in their other 2 games. They were led by the guard play of Ryan Moore, Nicolas Hardiman and Brendan Devine, the shot blocking presence of Nate Moore, and the inside games of Liam Yin and Brendan Mullahy. Roan Smith’s non-stop defensive motor was also running as usual.

13-Under Bindner struggled through their first 2 games but found some rhythm vs CT-PHD in the final game. They started working the ball inside to open up the offense, led by the tough play of Jack Iacono. Zarius Eusebe, Tyler Moody and Andre Mead were fast and athletic down the floor. Miles Bradley and Gerard Roarty contributed buckets.

13-Under Lipow started off with a thrilling back and forth OT victory over Bomb Squad. They followed that up with a goose egg Sunday morning against High Rise Elite, but bounced back with a proud underdog performance against Playaz Academy, keeping it interesting to the end. Jack Petrafesa scored 49 points between Bomb Squad and Playaz Academy… and importantly they were an efficient, unselfish 49 points. Jack P. was getting to the rim at will, drawing And-1’s, draining 3’s and dishing out to teammates. Jack Knott was a defensive force and wowed the crowd with his shot blocking against the Playaz, complimenting that with a pretty mid-range game. TJ Martere showed up to the party vs the Playaz with key rebounds and defensive plays of his own. Dillon Mannix made smart decisions from the point and used his speed to out-hustle much larger opponents. Eamon Jones and Brian Fullenbaum contributed timely 3-pointers and used fundamental box-outs to steal away rebounds. Thierry Thelismon brought tenacious defense into the mix.

This was an exciting opening tournament for all 5 Fierce teams. Looking forward to next weekend!